For ten of the past eleven years, I have engaged in a Global Earth Exchange (GEX) in support of Radical Joy for Hard Times, the nonprofit run by a friend and colleague of mine. Each year I have followed the suggested steps for engaging this ritual: to tell stories in a natural place that has been harmed in some way and to make beauty there using just what can be found at the site. Because my GEX always involves trees, I call it “Treephilia.”

Because of the utterly unprecedented times we are now in, I chose to do my Treephilia ritual differently this year. Instead of taking beauty to a wounded place, I took wounds to a beautiful place. Instead of using only what I found at the site, I carried in ritual materials.

For four months now, I have hiked through my neighboring forest nearly every day with the pandemic on my mind and searing my heart. There is a lovely clearing in the underbrush in an area of the forest I variously call “the sanctuary” or “the cathedral.” The trees standing in this holy-to-me place are primarily redcedars. There is one particular tree who I have unimaginatively named “Redcedar.” This tree has been the site of my prayers, gratitude, cries for healing, and silent meditations throughout this pandemic.

I have knelt beside, laid my hands upon, hugged, cried, videotaped a bereavement message near, photographed, crawled onto, leaned against, sighed beside, cupped my hands in prayer toward, and pressed my forehead upon…Redcedar. She has held my process, my fears, my grief, my relief as I daily express in her presence what I, my loved ones, acquaintances, and the world are enduring. In recent weeks, she has also held my emotions about and deepened commitments to dismantling systems of inequity and oppression that bind us as a nation and a world.

So, on the summer solstice (in the northern hemisphere) 2020, I did my Treephilia ritual at the base of tall, strong, beautiful Redcedar. After hiking into the forest until I reached the clearing, I greeted Redcedar and thanked her for being there. I let my eyes scan up her trunk until my gaze reached her needle-covered boughs which seem to touch the cerulean sky. I breathed in deeply. Then I got to work unpacking the ritual items I had carried in.

Just on the exposed roots of Redcedar I created an altar on which I laid: cones, feathers, shells, acorns, moss, lichen, various types of bark, and seaweed; these are all items I have gathered in natural places near and far. Some of the natural items I used to create this altar represent the people and wounds I was carrying in to my ritual. I also placed a sage smudge wand, birch candle, and stacked a rock cairn on this altar. In one corner I added a swatch of an old Radical Joy T-shirt with its signature bird image. In the center, I added a number of tiny cones that cover the forest floor at the site of Redcedar.

I had taken with me a list of the severe crises that my friends, clients, and family are facing. I had on that list the people I know who have died in recent months – some passed away from COVID-19; others died from different conditions. I had created a global list of names, families, groups that I know are suffering in these times.

In synchrony (though not planned) with the GEX this year, my loved ones on the east coast were holding a ceremony to honor a beloved who died of COVID-19; their memorial occurred on the same day that I did my GEX ritual.

Just below the altar, I added a large split bouquet of dandelions from my yard. This “weed” flower represents the many ways we have not been able to show up for one another during these illnesses and deaths; people are dying alone and their loved ones are not able to hold traditional memorials and funerals. These rites of passage are significant, as is their omission during this crisis time. As a longtime hospice volunteer who has been at the bedsides of many, many people who are dying, this has been an especially difficult aspect for me of this COVID era.

And just below the dandelions, I created a stylized image of a bird/sun using a senba tsuru that I made thirty-five years ago for my mother’s fiftieth birthday. I had learned about the symbolism associated with stringing up one thousand paper cranes during the year I lived as an exchange student in Japan. That year, I had also been instructed in how to make these origami forms. The crane is considered holy in Japanese culture. Origami cranes are a symbol of peace. One of the meaningful ways in which senba tsuru tend to be created is as a wish for recovery for someone who is ill. This particular senba tsuru has also recently gained greater significance for me; after my mom’s passing twenty months ago, I “inherited” this gift I had made and that had hung in her home for three and half decades.

I knew the senba tsuru, for all of the reasons I mentioned (and more), had to be part of my GEX this year.

After shaping the cranes on the ground next to Redcedar, I said some blessings and then slowly read the list of sufferers that I had compiled.

Redcedar bore it all. She stood, stalwart and healthy as I offered wound after wound (in the form of people’s names).

I felt a release after it was over. Redcedar’s beauty, the beauty I had made, the natural beauty of the sacred place all converged to heal something deep within me. I did not realize until right now – in the writing of that last sentence – that I had also taken wounded me to the site for the GEX. 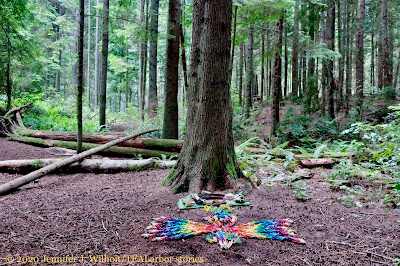 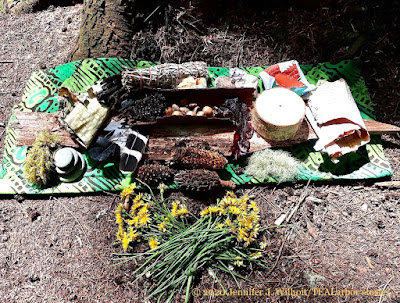 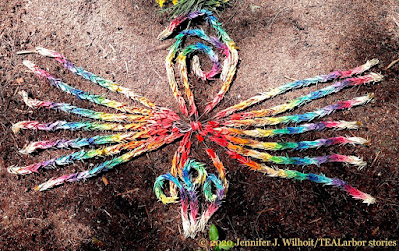