I have been observing and journaling about my backyard bird neighbors for thirty years. While living here in the Pacific Northwest, the common dark-eyed junco has been prevalent in my writing.

Over the years I have:

placed fallen babies back in their nest,

been wing-tapped by owls, mockingbirds, hummingbirds,

felt the tug of a penguin’s bill on my thick jacket sleeve,

made a death altar for a great blue heron,

seen birds use tools to crack open seafood and nuts,

seen a crow steal a robin chick from its nest,

sneaked a peek at a bird hiding its cache,

enjoyed the wobbles of day-old fledglings,

been kept awake at night by birds, and woken in the morning by birdsong,

counted eggs one by one as they are laid over days,

delighted in the glimpses of chicks in the nest,

been observed by birds – intently, and followed by them too,

witnessed the empty nest within hours of the fledge …

But through these decades, I have never seen a bird actually fledge … until five days ago.

Having put the likely fledge date on my calendar for a brood of junco babies, I went to the nest site on the noted day. Using the telephoto on my camera, I could see from a distance that the chicks were still nestled in.

I watch what, within me, is fledging today – even as I notice what is fledging in the wider world of humans.

One guy flapped a bit and his eyes were wide open, blinking. Then – quite unexpectedly and suddenly – out he came … flapping to a gentle landing on the nearby gravel.

I wonder in what areas of life we are taking those first test flights.

He looked as startled at his feat as I felt watching him.

Then, just as quickly, two more nestlings made the grand transition to “fledgling” by kind of haphazardly flapping, taking low altitude flight, and landing on the ground.

One huddled by an outside door.

Where, with whom, and in what do we seek refuge?

Another sprinted to the soil underneath a rose bush.

How do we balance the need for sheltering in the fallen rose petals with the hard work – and possible falterings – of testing our ability to fly?

The third escaped my attention long enough to scramble across a vast distance for a baby (thirty feet through six-inch high clover and weeds); he ended up posing for many photographs – conveniently standing atop a gardenbed’s brick border.

Which natural instincts fuel our movements in the broad world, and what can we consciously strive to do to come together stronger, more effective, and whole in the web of life?

The fourth stayed in the potting-soil-bag nest (where mama had cared for them) for almost an hour, sometimes trying out her wings but never exiting. I missed seeing her fledge because I was consumed with watching her siblings on the ground. When I checked the nest and saw she was gone, I heard a soft peep and realized she was several yards away running toward the front yard. As she rounded the corner of the garage, one of her parents was waiting for her with food. I watched as the adult placed her beak, full with a meal, inside the baby’s gaping mouth.

With whom do we congregate once we’ve left our haven of home? And are those “others” the ones with whom we can be our real selves, working together for a more compassionate, just, healthy, safe world for every being?

I spent a miraculous moment completely absorbed in four juncos who turned from nestlings to fledglings; I spent the next two and half hours taking telephoto shots of the babies moving about the yard … documenting their first hours out of the nest.

There are infinite reflections from a morning immersed in the everyday life of another species. Nature offers never-ending fodder. For growth. For inspiration. For strength, respite, insight, healing. It is not separate from the causes for which we rally; it is the very source from which we can draw to deepen and expand them. 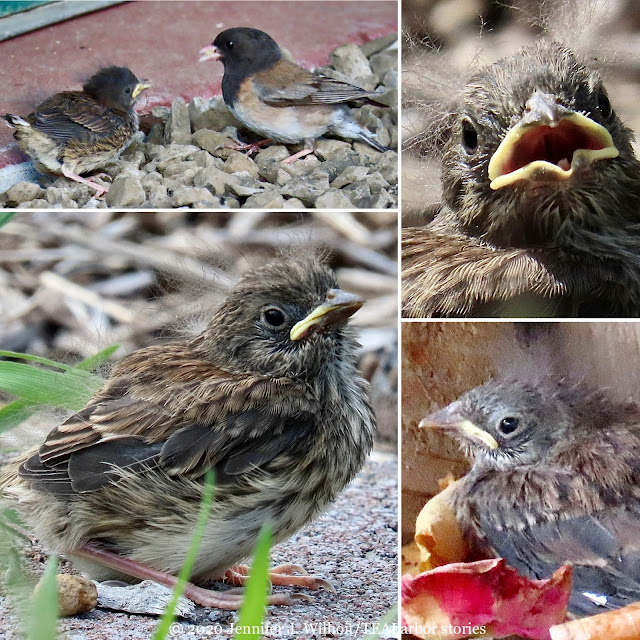