Transformation Through Water and Sound

A few days ago, I was doing my annual autumn cleanup in the lily garden bed.

This is the place where …

I have buried three juncos.

A variety of lilies sprout green leaves in late winter, bloom greatly vivid flowers in cycles from late spring to mid-fall, then do some sort of generative sacred thing underground for a season and a half.

Slugs of all sizes and colors feast year-round.

Swallows’ poop nourishes the soil from their eaves-nests high above.

A tiny little green frog climbed the stalks of the lilies a few autumns ago.

I’m not fond of cutting back all those lily bushes; it feels harsh and destructive even though most of the greenery has dried to the color of death by this time of the year. But the other day I was taking advantage of a short window of sunshine in between torrential rainstorms so that I could get the task done. The carillon choir I belong to had spent the morning ringing bells and I was feeling chipper as the melodies continued to reverberate within.

Starting on the west side of the bed, I cleared out most of the dead leaves. Despite myself, I was really enjoying how tidy the bed was becoming. And my hands in the wet soil felt delightful. I found a few stray plants (what some would call “weeds”) who had taken shallow root, and I gently—though apologetically—plucked them, adding to the large pile that I would haul to the compost.

For some reason I couldn’t explain right then, I skipped over the second to last lily and cut back the plant on the far eastern edge of the garden.

As I returned to the final plant and stooped to grab and prune it, I saw something reddish on the dark, sodden soil. I paused.

Put down the shears.

And there was—for the first time ever in my garden—a northern red-legged frog! He was a male, by the palm-sized width of him. Although he was very still, I could see him breathing; he didn’t appear harmed in any way.

I began, as I typically do with someone I’ve unexpectedly encountered, a conversation. After an initial greeting (Oh, hello!), I started in with a long litany of reassurances that I would not harm him. He did not try to jump away. Red Legs just sat there and occasionally nosed a bit deeper under the plant. I very carefully picked off some strands of wet vegetation that were tangled around his torso and back legs. I photographed him from many different angles, being sure to thank him and offer compliments each time his likeness appeared on my phone. I touched him a few times, parted the leaves to get a better look, marveled at his ample girth and brightly hued skin.

And I expressed my dismay to him for cutting away so much of the foliage in which he had found a haven. Had I known Red Legs was there, I would have gladly forgone the garden task so he could abide in that Eden for as long as he desired. It was too late for that. Instead, I promised him that I would leave the remaining lily until he found a new cozy place to reside. It reminded me of a few months ago when I guaranteed the bees that I would not harvest all the lavender flowers that sustained them in another garden bed; I kept that vow, and I kept this covenant to Red Legs.

The next day when I returned to the garden bed, Red Legs was gone. Though our encounter had lasted less than an hour, I was appreciably touched by his presence.

Frogs are sometimes thought to symbolize transformation through water and sound.

Indeed, the bellringing, the torrents of rain, and the upwelling of love for Red Legs that day seemed to converge into the shape of a small inner transformation: the ability to be moved by the huge and unexpected gift in a tiny chore.

Even more than that though, I treasure the opportunity to:

be captivated by my nonhuman neighbor,

have time to slow down and hang out with him,

speak and listen to him,

imagine his life in my garden and beyond,

cease my pruning before the task is completed - as a gesture of ongoing welcome,

Wherever you find shelter now, Red Legs, I send you love and gratitude. 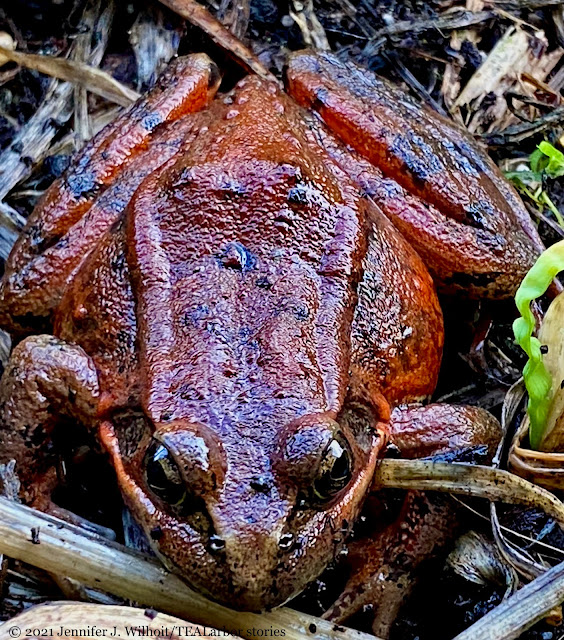 Register for courses and events
Read the newsletters